Citizen science volunteers work hard to encourage and maintain suitable nesting sites for bluebirds. Bluebirds around where I live have been in decline due to habitat loss and also habitat succession as the farms of yesterday have been turning back into forests removing the broad open meadows once common place. To help assist beautiful bluebirds, nest boxes are placed in the remaining open meadows.  Bluebirds like to forage in these open areas and also require nesting shelters that are out in the open. They will not nest too close to the forest edge or within likely due to competition with other bird species for those nesting shelters.  It turns out that placing two nest boxes back to back or within 15 feet helps to allow tree swallows to take up one box and bluebirds to live in the other. This relationship works because the tree swallows will defend their territory against other tree swallows but allow bluebirds to move in. Bluebirds and tree swallows tolerate one another because the bluebirds are feeding from the ground level whereas the tree swallows feed in the air with their acrobatic maneuvers as they swoop up flying insects. 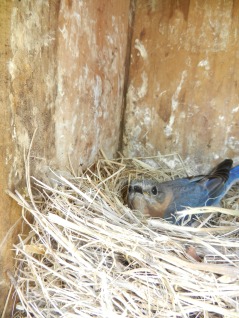 Bluebirds work hard to create a suitable home for their young and will aggressively protect it.  They face increasing nesting competition due to non-native birds like European starling and house sparrow. Fortunately, when a good location is provided they can have up to three broods a season.

We can use the data to identify the suitable habitat elements that support bluebirds, document resident bird populations, increase available shelter for bluebird species recovery and promote a stewardship ethic that cares for our natural environment.

Consider installing a single box or an entire trail of boxes during National Nest Box Week in February to have them ready for the spring season.

To learn how to properly construct a bluebird house and much more, visit the North American Bluebird Society.

With @alexd_outdoors Fishing was a challenge with low temps, high winds and ice accumulating quickly on the gear. I had setup to catch brook trout in shallow water with light #4 lines set just under the ice with small to medium shiners on a circle hook but none were caught this trip out. I had scouted the area in early summer when the skeeters were in full force. Now the forest was settled into winter with a few red squirrels barking and chickadees chirping. Day old hare tracks were scattered through the birch, balsam, pine, hemlock, cedar and maple forest but none were spotted despite efforts to find them. I've studied the maps looking for new winter sites to explore that have a resonable sled in distance and potential for open season fishing or snowshoe hare. Maybe a few more days would have produced some #forestgroceries If you have any knowledge of good winter camping spots in the ADK or Catskill wilderness areas pls let me know! #wintercamping #icefishing #hottent #tipupfishing #jigrod #bushcraftusa #bushcraft #wildernesstravel #adirondacks #adklife #snowshoehare #winter #newyorkbha