To build a Lenape style wigwam requires approximately (20) three inch diameter trees flexible enough to bend into a framework that can be covered with grasses, bark and or some animal skins.  For the Eastern Woodland Indians, animal skins from deer and bear would be hard to completely use as a covering because you would need a very large number of them compared to the approximately 21 larger buffalo skins that would have been used by plains Indians to cover a tepee. The tepee would requires about (15) twenty foot long poles that would be covered with the hide and could be put up and down to be moved from location to location.

This Wigwam was built by my friend Mike Dennis of Traditional Earth Skills. www.TraditionalEarthSkills.com

Mike presents about Native American Life while wearing traditional period clothing and allowing students to interact with the stick, stone and bone tools of the time.  I highly recommended booking a memorable program with him.

To find out more about the wigwam building process check out my article in Self Reliance Illustrated magazine issue #16 – Click Here to Download  You can subscribe at http://www.selfrelianceillustrated.com/ 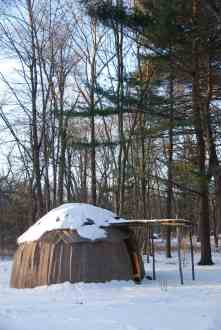 Wigwam – After a few months 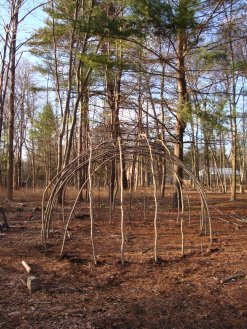 The frame covered with reed matting

Tried to revive this thick brook trout after a fight from the depths but it didn't take so it went into the smoke for a few hours until suppertime. Made for a most delicious camp meal.

Tried to revive this thick brook trout after a fight from the depths but it didn't take so it went into the smoke for a few hours until suppertime. Made for a most delicious camp meal.
Carried my gear deep into the Adirondack Mountain Preserve in search of big Brook Trout and found just what I was after.
Canoe camping early June with my wife @nataliahubisz and doggie Oly.
A few photos from work this month. I enjoyed sharing fire friction, campfire cookery, fishing 101, swamp tromps and canoe trips. We cooked rainbow trout both on a stick and wrapped in burdock leaves over the coals. We boiled fresh picked nettle greens and poured the water off as tea. Fun to see the kids enjoy a taste of the wild. A few more fishibg derbies are scheduled and as the weather warms up, I'll share a lot of frog pond science and butterfly tent safari programs.
Guided @mr.smothers in the wild. We found a few rainbow trout for a catch & cook.
After work visit to float and catch a little sun and fish with my wife @nataliahubisz She quickly caught a pickerel and a thick 10" bluegill. I caught a 14.5" yellow perch. Three species pulling on the line.
Loading Comments...
%d bloggers like this: