This past weekend some bushcraft and outdoor skills came together when an evacuation of a friend at a backwoods campsite became necessary. He had an accident with a Trail Hawk Axe while processing firewood when a glancing swing come back and hit him in the shin.

He explained, “Why it happened is easy. I was dumb. I broke the rules and paid for it. After we arrived at camp and said our greetings, I started to collect fire wood. Since doing a day trip, I only brought my Trail Hawk and an Opinel folding saw, not a buck saw, which was what was needed. The major mistake was that I was using the hawk in an unsafe manner. I was cutting a branch about chest high with axe. If the hawk missed, there was no safe backstop like the ground or another log to stop it. Just me. I’ve done it a hundred times with no problems, but this time I didn’t get away with it. That’s my stupidity.” 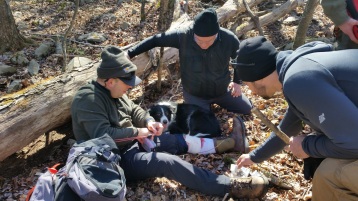 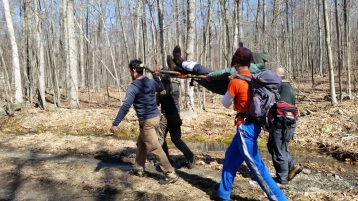 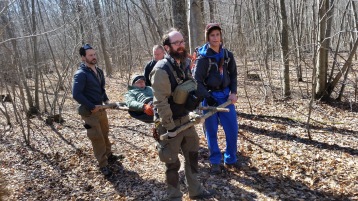 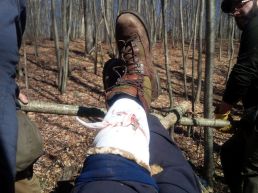 We benefited well from having multiple people with EMT and Wilderness First Aid Responder training including the patient himself who stayed calm and expertly directed his own care with our observation and questioning. Each of us had packed medical kits should we have to deal with such a situation and we had a mix of bandages and wraps to apply on and compress the injury.

It became clear quickly that he would not be able to hobble the mile long rough uphill terrain out of the forest so we reassembled a bushcraft campchair into a stretcher using cordage and lashings.

Luckily we had 5 guys on scene to assist with the evacuation as our best exit was an uphill route that began in a dense forest of saplings. At this stage it was easiest to carry our patient at waist height to best navigate the brush.  As we made it onto an old logging road and the forest began to open it became far easier to carry at shoulder height and rotate positions to alleviate stress.

It took us almost two hours from the incident to get to the cars before travel to a hospital.

Time to reevaluate the first aid kit for the next trauma and to remember that complacency can be the most deadly environment we find ourselves in.

In autumn the mosquitoes, black flies and noseeums go back to hell where they belong making camping more enjoyable but also the brook trout undergo morphological changes as spawning nears. The males develop a slight hook and extension of the lower jaw, build up of musculature just ahead of the dorsal fin and ofcourse the bright color changes. They also get black coloration inside the mouth and at the anterior of the belly.

In autumn the mosquitoes, black flies and noseeums go back to hell where they belong making camping more enjoyable but also the brook trout undergo morphological changes as spawning nears. The males develop a slight hook and extension of the lower jaw, build up of musculature just ahead of the dorsal fin and ofcourse the bright color changes. They also get black coloration inside the mouth and at the anterior of the belly.
I upgraded my fishing net with a custom order from @riversongnets and hit the North woods & water in search of Brook Trout. The speckled charr were in their spawning regalia against a backdrop of autumn foliage.
How many of you eat mushrooms? Have you tried wild foraged fungus? Lotta good flavor and texture and color! Go check out a farmers market and pick some up if you havn't tried em. #Grifola frondosa
No snooze button crew. Chasing that autumn flush. Hit up @theforagedfeast to purchase culinary delight!
Last photo drop of my recent trip out. One of the nights I paddled down the grassy section of the cedar river flow up and over beaver dams until I hit the NP trail. A short portage to the carry leanto and a short paddle upriver to check out carry pond just up a little hill. The pond was shallow and full of newts and lacked an established campsite so I made a decesion to continue on and float back down the cedar river. It paid off with a beautiful site and sunset!
Another pond explored. This one was a four mile portage with some beaver activity that washed out part of the trail. No bother to me, plenty of experience with that after the Little Tupper traverse trip.
Loading Comments...
%d bloggers like this: